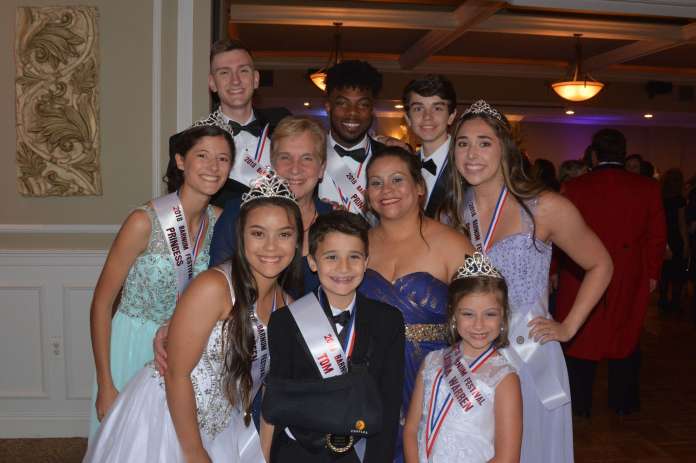 When the last clap of fireworks burst into the sky the night of July 1, signaling the end of the 2018 Barnum Festival, it capped off a whirlwind eight weeks for the members of Ringmaster Johnny Vazzano's Royal Family.

Since being named to the 70th Anniversary Barnum Festival Royal Family at the annual Coronation Ball in May, the six area high school students, along with the winners of the elementary school Tom Thumb and Lavinia Warren contest, have taken part in almost three dozen official events. They've attended numerous parades and celebrations, and visited 19 senior residences in Bridgeport, Fairfield, Milford, Monroe, Shelton, Stratford and Trumbull.

'My Royal Family has been absolutely amazing,' said Vazzano. 'Working with these young people is one of the highlights of my journey as Ringmaster. It's been an honor to get to know them. They're the best role models and ambassadors any Ringmaster could ask for. My wife, Heidi, and I mean it when we say we've made lifelong friends. They're a very special group. We can't wait to see what they accomplish in the future.'

'Before they were selected, none of these kids knew each other,' added Charles Carroll, Barnum Festival Executive Director. 'Watching them come together has been such a pleasure. They've put a great deal of time into this, and a lot of it came at the end of the school year when they had exams and other commitments. I was so proud watching the Royal Family entertain at the nursing home roadshows. I want to thank each of them for representing the Festival so well. Their leadership and enthusiasm paid the perfect tribute to P.T. Barnum in this anniversary year.'

The six high school members were chosen from a group of 32 outstanding juniors from schools in Bridgeport and surrounding towns. They were nominated in the spring by their respective schools to compete in the 70th annual Barnum Festival King and Queen competition. The students were nominated and chosen based on their academic achievement, extracurricular activities and, perhaps most importantly, in the spirit of the greatest showman himself, their commitment to the essence of the Barnum Festival — community service and involvement.

In addition to the King and Queen, this year, the panel of five judges chose two Princes and Princesses due to the candidates' outstanding credentials. Each of the winners received a scholarship through the generous support of the Ernest and Joan Trefz Foundation.

The Barnum Festival is dedicated to carrying on P.T. Barnum's dual legacy of entertaining people and helping the community. In a fitting nod to tradition in this 70th anniversary year, Tom Thumb and Lavinia are true legacies. Demetri's sister, Nikki Karagiannis,was Lavinia Warren in 2013, and Nicoletta's father, Greg, was Tom Thumb in 1992.

Following are snapshots of the 2018 Barnum Festival Royal Family:

'The Barnum Festival, to me, means a group of people who come together to help others by spreading joy and giving their time. This has given me and the others in the royal family an opportunity to truly express ourselves and give back to those who have shaped our future.'

Tristan lives in Shelton and attends Masuk High School, where his father, William, is a teacher. He currently plays varsity basketball and volleyball and club volleyball. Next week, he'll be attending the Junior National Volleyball Championship in Phoenix Ariz. Off the court, he is a member of Masuk's Robotics team and is involved in Ciara's Light, for Dravet Syndrome Awareness; the CHIPS Program, part of the national program for Child Identification; parrot rescue and rehabilitation, and he plays piano and guitar. Tristan wants to work in biomedical engineering.

'I get to be a part of a loving family, not only the Royal Family, but the Barnum Festival volunteers, too, because everyone just sends love. Now I'm a part of history and it's amazing and inspiring.'

Damarys attends Harding's Health Careers Magnet Academy. She is very involved helping people in need in the Puerto Rican community, and has collected such necessities as coats and bookbags. She has been active raising money for scholarships and cancer research. As a dancer with the Rockwell Dance Center, she specializes in modern dance and ballet and teaches young dancers. Damarys plans to become an athletic trainer working with professional athletes and dancers.

Jurlan attends the Plumbing and Heating program at Bullard Havens. He is OSHA 10 Certified and recently began an internship at Sikorsky working as a hydraulic mechanic installing the plumbing and hydraulic lines on aircrafts. Jurlan received weeks of training, particularly in blueprint interpretation. At Bullard Havens, he plays football and meets with incoming students and parents for freshman orientation. He also volunteers at Full Gospel Baptist Church as a sound room engineer. Jurlan's professional goal is to attend a four-year university and major in Business Administration and Management, which he hopes ultimately will lead to owning his own plumbing and heating ??company.

'Being a part of the Barnum family has truly been one of the most unexpected blessings in my life. With each event and person I encounter, my appreciation for the festival, volunteers and Royal Family has grown. I know all the friendships I have made will last a lifetime because everyone involved with the Barnum Festival epitomizes selflessness and generosity.'

Katherine, who lives in New Canaan, is founder and president of the Mock Trial team at Lauralton. She is captain of the swim team and a member of the first all-female Engineering Team to win the Sikorsky STEM challenge. She also is a peer mentor to underclassmen. Her community involvement includes helping the elderly clean their houses and yards through the Catholic Heart Work Camp program, and providing homeless people with winter clothing and warm food in the Midnight Run to New York City. In the future, Katherine hopes to continue helping the community through working in healthcare management, to ensure that all people have the best care possible.

At Fairfield Prep, Michael is a freshman retreat leader. He runs for the cross country, indoor track and outdoor track teams and is captain of all three teams. He participated in the Appalachia Immersion Service trip last summer, and volunteers at the Kennedy Center's drop-in program and for the Salvation Army. He plans on becoming a doctor.

'Being a part of the Royal Family has been unlike any experience I've ever had. It's more than playing dress-up. I've been given a platform to help people and make connections within our community. Everyone involved with the Barnum Festival is passionate about paying it forward, and that's the best way to honor P.T. Barnum's legacy.'

Regina is passionate about raising money and awareness for pediatric cancer, and working with children with intellectual and developmental disabilities. She is an avid runner and captain of Trumbull High School's girls cross country and outdoor track teams. She recently was appointed President of the new junior board for Infinite Love for Kids Fighting Cancer and is spearheading a hair donation and fundraising event in September for Childhood Cancer Awareness Month. Her other passion is creative writing, which she plans to pursue while majoring in secondary English education. ''

And from the youngest members of the 2018 Barnum Royal Family:

'The best part of Barnum was the Roadshow. I loved making the elderly and special needs people happy.' '''''?